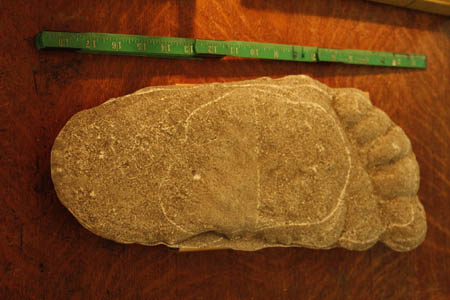 Steven Streufort, the owner of Bigfoot Books in Willow Creek, showed off this 18-inch-long plaster cast taken from tracks found in the forest. / Photo by Kristan Korns, Two Rivers Tribune.

Tribes all along the Pacific coast, from Central California all the way up to Alaska, have shared stories about large hairy human-like creatures that live hidden in the forests of the Pacific Northwest. Steven Streufort, who runs Bigfoot Books in Willow Creek, said that European settlers arriving in the area disregarded the stories at first – until they started finding footprints and catching sight of the creature themselves. It wasn’t until the twentieth century that the local stories reached the outside world. “In the late 1950s they started to cut into a remote area of virgin timber north of Weitchpec,” Streufort said. “When they started cutting roads into there, they found footprints in the new roads.” A logging tractor driver from Salyer named Jerry Crews took pictures and made plaster casts of huge footprints at his work site near Bluff Creek. The footprints were 16 inches long. The Humboldt Times in Eureka published the pictures in October 1958, and the story was retold by newspapers around the world.

Despite the stories of Bigfoot being in the worldwide news media for over 50 years, and told throughout the Pacific Northwest for hundreds of years before that, people are reluctant to come forward with their own sightings. “They may tell you if they know you and trust you,” Streufort said, “but they don’t want to go on the record. It can damage your reputation publically.” Many well-known and respected local residents are rumored to have told close friends and relatives that they saw Bigfoot, but almost no one would talk with the TRT about their experiences. Serene White, a former legal clerk for the Hoopa Valley Tribal Court, explained why. “A lot of people keep quiet about what they’ve seen,” White said, “because they don’t want people to think they’re crazy or a liar.” She said that people have come up to her on the street, harassed her, and called her a liar. White said that she only told a few people about what she’d seen, before James “Bobo” Fay asked her if she’d retell her story for “Finding Bigfoot” on the Discovery Channel. White said that she saw a creature around midnight on August 21, 2007, not long after she returned to Hoopa after studying at the University of Nevada in Las Vegas. She was on the river bar near Chief Jackson’s, at the very north end of Hoopa near Beaver Creek, and saw something in the moonlight. “I thought it was a bear at first. It was hunched over with its hands in the water,” White said, “There was someone else there with me, but they want no part of this.” White said that she grabbed a large flashlight and pointed it at the creature. “When I turned on the light, it stood up and turned, and it made some sort of growling or crackling noise,” White said. “Have you ever seen hackles come up on a dog? That’s what it did. Then it ran off. I just watched it, sort of in pause; like shock,” she said.

Streufort said that he has heard stories like that from dozens of people living in the Klamath-Trinity area. “There’s so much unexplored forest in the Pacific Northwest that you can’t cover it all,” Streufort said, “but people have seen these creatures. Streufort said that he knows a woman who works for the fire service who has seen Bigfoot and found tracks. The woman doesn’t want to go public, he said, because she’s afraid she might lose her job. Not everyone harasses Serene White for telling her story. Privately, many people share their own stories, or their family’s stories. “About 50 people in town have talked to me about it,” White said. “It was either their experience, or their dad’s, or their great grandma’s.” White didn’t think the creature she saw was an animal. She said that it looked more like the things her elders had told her about when she was a kid. “When I was told all those stories as a kid, I thought they were just to scare kids into staying close to camp,” White said. “I didn’t think they were real.”