A new hunt is about to begin for China’s Yeti, the ‘Wild Man’ who lives in the dark forests of central Hubei province. 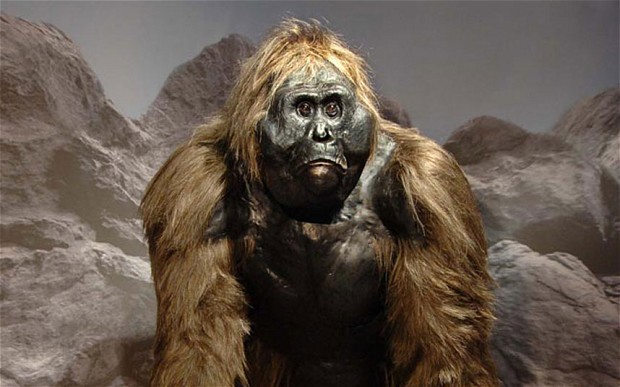 Standing 6 foot 8 tall and covered in dark grey hair, this Chinese incarnation of Bigfoot has been spotted hundreds of times

For centuries, the villagers who live around the Shennongjia forest of China’s central Hubei province, a forbidding 1,000 square mile reserve of high mountains and deep forests, have believed that the Wild Man, or Yeren, lives among them.

Standing 6 foot 8 tall and covered in dark grey hair, this Chinese incarnation of Bigfoot has been spotted hundreds of times.

Improbable, at least by Chinese standards, size 12 footprints have been recorded; long thick strands of hair have been tested by scientists, who proclaimed that they did not belong to any of the known creatures inside the reserve.

But no one has ever proven its existence.

This weekend however, a new team of 38 researchers drawn from several different Chinese universities and research institutes will fan out across the Shennongjia reserve on an expedition to catalogue the region’s unique ecosystem.

Their trip will continue throughout August, and the researchers will collect data on the 1,000 or so different types of animals that live in Shennongjia, including the Golden snub-nosed monkey and a white-furred bear that is only found in the reserve.

If the researchers manage to find concrete evidence of the Wild Man, they will have succeeded where two major previous expeditions, one in 1974 to 1981 and one in 2010, failed.

“I simply want to put an end to the argument that it exists,” said Wang Shancai, at the Hubei Relics and Archaeology Institute, when he set out in 2010.

In 2005, Zhang Jiahong, a shepherd in Muyu, near the forest, told the Chinese state media he had seen two of the creatures, with “hairy faces, eyes like black holes, prominent noses and dishevelled hair, with faces that resembled both a man’s and a monkey’s.

Another explorer, Zhang Jinxing, spent years living as a hermit in the Shennongjia forest, and said he had seen footprints on 19 separate occasions, without ever finding the beast.

However, Zhou Guoxing, a former director of the Beijing Museum of Natural History and a paleontologist, has poured scorn on the idea that there may be a Chinese Bigfoot.

“There is no Wild Man in this world,” he said, earlier this year.

“I’ve visited every place where the Wild Man was reported in China.

“I’ve studied everything related to the Wild Man including hair, skulls and specimens. All of them are dyed human hair or come from monkeys and bears.”

He claimed the local government in Hubei is simply trying to drum up tourist revenue. And indeed the Shennongjia Nature Reserve has recently signed agreements with Beijing to help promote package holidays to the area for nature lovers and yeti hunters.

The name of the nature reserve comes from the Emperor Shennong and the word jia, meaning ladder. The emperor was said to use the ladder to climb up the area’s mountains, and it subsequently transformed into a lush forest.