The second day in Delhi and we made an early start for the journey to the Taj Mahal. I had been warned that on the way we would pass through the old Delhi and to be prepared for the extent of the poverty I will see.

Within five minutes we were passing makeshift huts constructed from material that the slum dwellers had salvaged from the nearby rubbish tips. Dirty faced children played next to open sewers, mothers hurried around tending to their babies and several individuals busy using the pavement as a communal toilet, totally oblivious to the passing traffic.  They were clearly taking the piss!!  Even within the Air conditioned coach, the smell of sewage was overpowering. 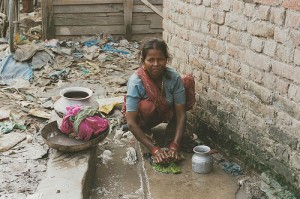 A barber was waiting for customers. His dirty chair by his side and cracked mirror on the wall. A women walked past the coach with a large collection of branches perched on her head. I wonder if shes ever heard of royal Ascot i thought? An old man with severely deformed legs, crawling along the road, the cars beeping their horns as they try to avoid hitting him.

The image that will stay with me for a long time occurred when the coach stopped at a red lights. All of a sudden a bang on the coach window alerted me to a young girl of about eleven, dirty and malnourished, clutching several boxes of tissues. She walked along the side of the coach, trying to get the attention of the occupants by banging on the coach windows. ‘Don’t open the window’, I heard someone say, ‘Don’t give her anything, otherwise you’ll open the floodgates’ . The young girl banged on my window and I made a fateful mistake. I made eye contact with her.

Immediately she began banging on the glass again, trying to get my attention, pressing the tissue boxes against the window. ‘One hundred rupees’ she kept on saying. I felt an unbelievable amount of sadness for this child and a sense of guilt that I did not purchase her ware. The image of her trying desperately to persuade me to part with my cash is one that I will not forget in a hurry.

Another thing that struck me was the sheer volume of people. Some sitting, some walking, some standing. Even the Indian equivalent of motorway hard shoulders was packed with people wandering around, as if aimlessly.

The slums have grown in recent years with people from the surrounding areas coming to Delhi in the hope of a better life. A better life that very rarely materialises.

The overcrowding, unsanitary conditions and lack of education combine to create living conditions where disease and death is rife. The Delhi slums created images that will haunt me for a long time.

The slums perfectly illustrate the dichotomy of modern India. On the one hand there are the modern, super sleek shopping malls where a Luis Vitton handbag can cost £5000 and yet a half a mile away, there are six year old beggers who  have barely eaten in days.  Charles Dicken wrote  about the ‘Tale of two Nations’

After five hours of travelling, we finally made it to the City of Agra, and the Taj Mahal. The city is also cursed with its share of slums,which are just as bad as its Delhi counterparts. What surprised me was that they were literally a stones throw away from the entrance to the Taj Mahal. And even as we passed through the entrance, the smell of sewage at one point was overwhelming to the point where I was about to paint the pavement with a nice coating of Breakfast!

Having said that though, My first sight of the Taj Mahal literally left me speechless. It truly is a marvel of beauty and architecture working hand in hand. 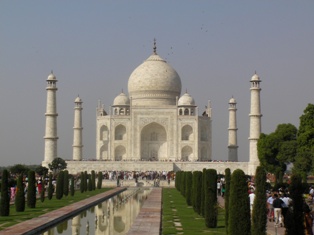 It truly took my breath away!

Books have been devoted to the building so I will not dwell on it here.

Next time, out of the Slums of Delhi and on towards the fresh air of the agricultural heartland, the Punjab and my Family home!!

Untill Next time, over and out.

3 thoughts on “An Englishman in a strange land (6)”