I had a relaxing day in the Hotel today. The women were busy shopping and so I decided to venture out of the hotel compound and go for a little stroll.

I made sure I had the taken all the precautions, shades on, baseball cap on, Mosquito spray on. I walked past the multitudes of people, some loitering, some shopping some just taking a rest while they pick their noses. Etc etc etc… 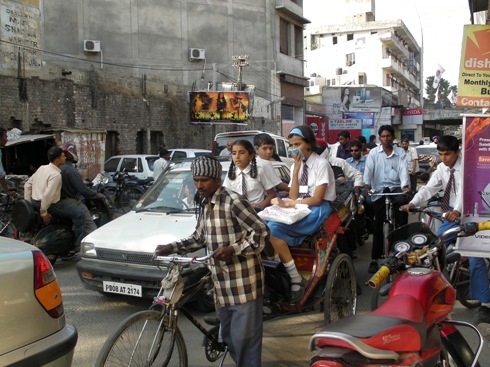 Street life in India is a totally Alien experience

In the UK we expect our pavements to be safe and fit for purpose. Here, there were pot holes the size of the Grand Canyon.  Even worse, there was no safety guards covering the holes. Word of advice, never jay walk in India!!

Crossing the road was also a risk. You need to look both ways and if you avoid being hit by a car, motorcycle or rickshaw, then a passing killer cow may finish you off. In fairness though, the cows just graze quietly without a care in the world. They are given free rein in the towns and cities because the Hindus regard cows as sacred animals. With the absence of grass they merely munch on the plentiful supplies of litter.

I was filming at a crossroads when I noticed two young girls begging money from cars which were stopped at red lights. They were barely seven years old. Once they laid their eyes on my  I was  a lamb to the slaughter. Travelling at warp factor 10 they were suddenly six feet away. Their  outstretched hands  in full begging mode.  I pulled out my Wallet and gave each one a 100 rupee note. Big mistake. They danced and waved at me in appreciation and then the older of the two began gesturing towards her feet.  A 100 rupee note was now not good enough for her and she now wanted me to buy her a pair of shoes. 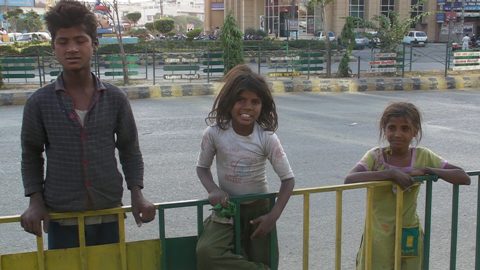 The children of the corn!!

I gestured to her that she can afford 10 shoes with the money I gave her. Both children then vanished. I began to walk back to the hotel when the two girls reappeared, this time with an older boy of about 12. He was just as dirty and unkempt as the girls and his begging  also paid off as I put a 100 rupee note in his hand. By now both the  girls were asking me to buy them shoes, the boy was still begging despite my gift to him and all of a sudden, warping in from the Gamma  Quadrant  a second boy appeared. Same appearance as the other three. This time I didn’t oblige.

At this point in time I was getting rather irritated. What is this I thought? The Village of the Damned?

Eventually I reached the hotel compound. The children clearly knew the limits of their begging and as quickly as they appeared they vanished.

I have mentioned the poverty a lot in my blogs but to be honest you cannot escape it. Everywhere I went, I saw poverty at a scale that will haunt me for a long time to come.

The next blog will be my last India update. See you then.

Untill the next time, over and out.