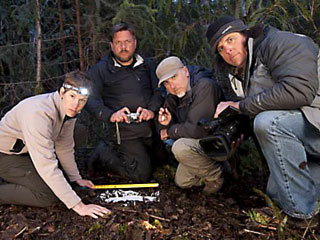 For those who haven’t seen the show, it’s a bit like Syfy’s Ghost Hunters, only an expert team looks for Sasquatch instead of spooks. There are interviews, data crunching, mysterious footprints and a group hunting in the woods … but no actual bigfoot.

The press tour reporters have spent nearly two weeks in a hotel interviewing actors and executives promoting TV shows. So when Animal Planet rolls out this panel the critics are, understandably, thinking: Show us bigfoot or GTFO.

A critic points out: If these guys actually find bigfoot, such huge news is not going to really stay quiet until a regular episode of Finding Bigfoot airs. One asks: Has Animal Planet run out of real animals to do shows about? Yet another wonders: First Animal Planet airs a mermaids special, now this — isn’t Animal Planet damaging its brand with this stuff?

Animal Planet’s president, Marjorie Kaplan, is good humored about the situation. “Animal Planet has many shows about animals that may be more familiar to you,” she says. “Finding Bigfoot is an exploration of the secret corners of the planet … There are places on this planet that we know about and places we don’t …  New species are being found all the time.”

She also points out the network’s Mermaids: The Body Found special* got “extraordinarily” high ratings.

The Finding Bigfoot team, however, is far less amused by the critics’ skepticism. Seems there’s a lot of anecdotal evidence pointing to the existence of bigfoot and this crew are true believers. (There is more than one bigfoot, they say, and they mostly come out at night … mostly…)

“I’ve had one 15 feet away growling at me,” declares bigfoot researcher Matt Moneymaker. “So that’s why I think it’s [unfortunate] when people say they’re not real. They exist … I don’t think people realize how many witnesses there are out there … For those who don’t think these things exist, [famed primatologist] Jane Goodall thinks they exist** — and she may know a little more about it than you do.”

So is there solid real evidence of bigfoot?

Absolutely, they say. There’s all kinds of evidence! Except, you know, an actual or former bigfoot.

“There’s every kind of evidence that they exist,” Moneymaker says. “Except bones. Except a carcass.”