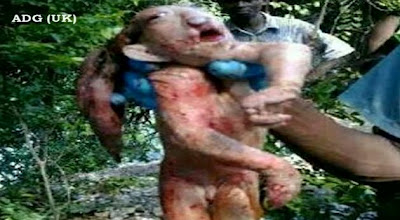 A photograph has surfaced showing an individual holding what looks like a dead troll like creature. Apparantly, as the story goes, the locals saw one of these creatures foraging for food. They shot at it, at which point it ran in to the woods. The locals, in the Republic of Namibia gave chase and soon reached it’s lair where they encountered three others. The original creature then attacked one of the locals at which pount the creature was then shot and killed.

According to reports, the creature was taken away by local police for a full forensic examination. It is important to note that the validity of the story has not been verified and the General consensus amongst the chatter on the forums is that the creature is merely a dead baby with servere deformaties. Others have suggested a heavily photoshopped image.