Day 4. Temperature 36 degrees. As we drove from the train station to the family home, it soon became apparent that the traffic in the Punjab is just as manic and suicidal as it is in Delhi. And in some instances it is even worse.

We had booked in to the Raddison hotel situated in the centre of Jalandha, but before we made our way there, my father was eager to show me the family home. He had insisted we stay there rather than the hotel, but it was pretty obvious that if I succumbed to my fathers wishes then clearly I would never leave the house due to the amount of visitors we would receive.

At least in the hotel we can do our own things.

I had heard stories that the house was very big and decorated to a high standard. I had only seen poor quality VHS footage over the years, but when I finally saw it in person a sense of pride enveloped me. Pride because my father had worked hard and built it to what it is now. It reminded me of an Indian version of southfalk ranch from the television series ‘Dallas’.

The floors were laid with marble throughout, the ceilings and coving had intricate carvings and the solid mahagony stair case bannister was a hand crafted work of art. The courtyard was large enough to host a five aside football match. It had three levels. 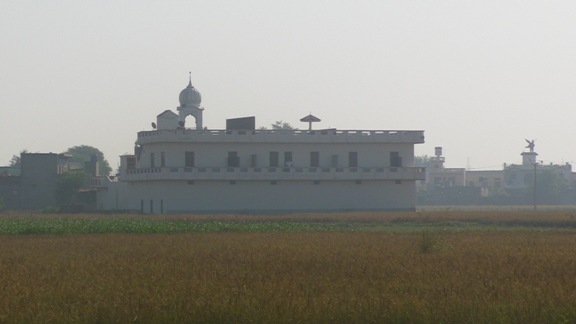 The rear of my fathers house taken on his land.

Two lovely servant girls were living there with their mother. Perhaps servants is the wrong word because these girls were treated like members of the family and thoroughly enjoyed what they were doing. They treated us with an enormous amount of respect and we recipricated by buying them bags of Chocolates and goodies. Actually my brother bought the chocolates.

Stepping outside the front door and all you could see was agricultural land as far as the eye could see. The sun was beaming down from a cloudless sky and for the first time in a while fresh air entered my lungs. The mass of humanity that had followed me throughout, had now been replaced by a few farm workers. The whole pace of life was a lot slower here. Camcorder in hand, i walked along a footpath taking me away from the house. The sights were truly beautiful.

I can quite happily live here. Sell everything in the UK and live like a king and that is no exaggeration. For the first time in my life, the Indian part of me which had remained dormant all my life began to stir..

Untill next time, over and out.

3 thoughts on “An Englishman in a strange land (8)”