Day 5 was a busy and thought provoking day.

Whereas my father’s family are landowners and clearly not short of a bob or two, my Mother’s family are very poor. She has three sisters and one surviving brother, each living in poverty. The itinerary for today was to visit each one and pay our respects. I, my brothers and sister agreed to give a monetary donation to each of my mother’s sisters of 2000 rupees each which equates to several months wages for them, yet to us it really wasn’t that much! Their daily income is about £1.20

Each of the houses was small and sparsely populated. The walls were bare apart from a number of photographs. To my astonishment my photograph was up there being displayed, along with my family and brothers’ and sisters’ families too. They were clearly proud that their sisters children were educated and doing well.

They served us refreshments they could barely afford, but what surprised me was that despite their poverty, they were constantly laughing and joking. They may have been poor in monetary terms but in spirit they were as wealthy as Bill Gates.

Again this was a very humbling experience. In England you would consider yourself poor if you can’t afford the latest mod cons. Here it is when you do not know where your next meal is coming from.

Travelling from house to house has certainly opened my eyes to the real India. This is well away from the tourist areas and the hustle and bustle of street life is something that needs to be experienced firsthand. Again, as in Delhi the mass of people is just unbelievable. India is the second most populous country in the world and judging by the number of people walking the streets here in the Punjab I can well believe that!!

My father had booked us a car and driver to use all day, and we spent a lot of time travelling from one place to another. But it was absolutely impossible not to get bored. Looking out of the car window and seeing the sights and sounds of the various places we pass through is in itself a highly interesting and eye opening experience. There was just too many things happening. And most of them are sights you will never see anywhere else but India.

The following photographs and stills from my camcorder footage perfectly illustrates my point. 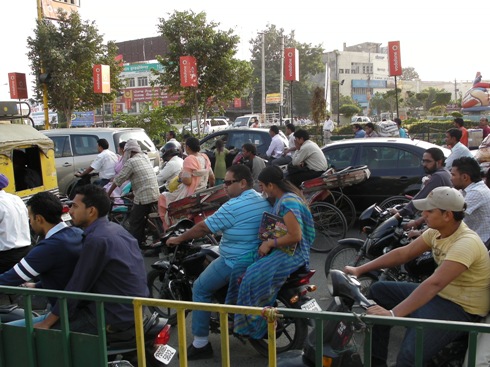 When the lights turn red prepare for mayhem. 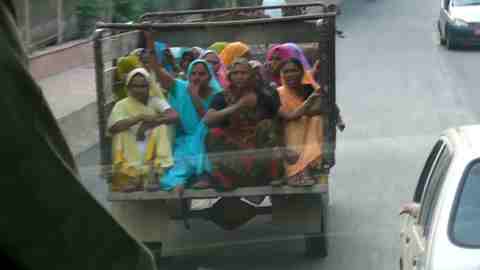 When husbands are sick of their wifes, they are sent to the market to be sold.

The following stills from my camcorder were taken during a 15 minute period.