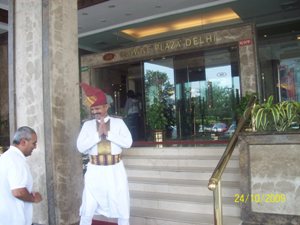 Landing at Delhi airport, my first preconceived misconception was firmly laid to rest. I was expecting an airport that was somewhat a living relic from the old colonial days of the British Empire. What I saw was a large, modern, airport complete with the usual array of designer shops. I could have been forgiven for thinking I was back at Heathrow. This was clearly an airport befitting an emerging Economic Superpower

The journey to the hotel (above) was another surprise. The hourdes of begging children and abject poverty that I was expecting was in fact replaced by smartly dressed individuals going about their business and a city landscape that was modern, clean and impressive.

The traffic however, was a totally different matter. I had heard stories about motorists’ total disregard for safe driving practises, the level of pollution and worse of all the incessant beeping of the horns which would turn even the Dalai Lama homicidal ( Now that is something I would like to see! ).

I can now say, hand on heart, these stories are confirmed so emphatically that not even a Professor of ‘confirming stories ‘ at Oxford University could have confirmed them any better!

Three lanes were marked on the roads and yet there were four lanes of traffic,. Ninety percent of buses/lorries and vans would almost definitely be illegal to drive in the UK. Clearly, Safety and mechanical checks would without a shadow of a doubt fail any UK tests. Part of the problem lies with the age of the vehicles, with many in excess of 20 years old.

Rickshaws zoomed in and out beeping their horns . Cars and Vans packed to the rafters with people. Some hanging precariously from the sides for dear life. I saw a cow and a couple of children resting on top of a lorry as it sped past us. Something you don’t see on the M5 I thought!

Overloading vehicles was something we saw over and over again. At one point we saw a giant Haystack that appeared to be floating along the road. On closure examination we noticed there was a vehicle underneath! Extremely surreal, yet normal for India.

If you thought motorists were bad, Motorcyclists, are a law unto themselves. In the UK we see the odd motorcyclist yet, in Delhi, there is probably one for every three cars on the road and they almost all carry passengers. But again, safety is a word which is alarmingly absent from their verbiage.

Male passengers sit on the pillion the same way as they do in the UK, but the women however have both their legs on the same side. Similar to when Her Majesty the queen rides a horse. But what really shocked me was that in a lot of these situations, women were carrying young children at the same time. A case in point saw a young child, of about three years of age, sitting on the handle bars, in between the riders arms while the female passenger carried two babies in each arm. The motor cycle was probably travelling at about 20mph at the time. You really couldn’t make it up!! 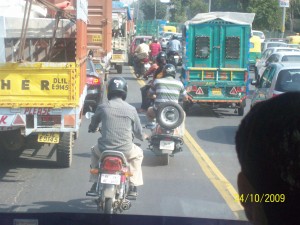 A quiet day on the streets of Delhi

It is very surprising that the number of serious accidents is not as high as it should be considering the above, although admittedly there are more close shaves here, than within the walls of the Product testing department at the Gillette Corporation.

In the evening we left our hotel and made our way to a popular indoor shopping centre. Another misconception added to the ‘destroyed’ list. 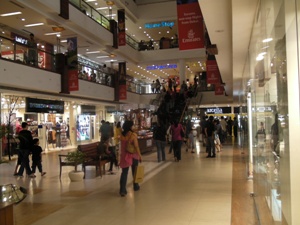 Who needs the Bull Ring!

The shopping centre was an impressive and modern as any I’ve ever seen here in the UK as Designer shops vied for business from a young upwardly mobile clientele. This was an India I was not expecting. So far so good i thought. Not that much different from England. Apart from the traffic that is.

How wrong I was!! I was not mentally prepared for the harrowing scenes of utter poverty and destitution that I witnessed.

All will be explained in the next update.

Untill the next time, over and out.