The last day in Delhi and we left the hotel early to reach the train station by 7am. Even at this early time the roads were bustling with traffic and a 30 minute journey took 45 minutes.

As the coach pulled up in the car park, assuming it could be called a car park,  we were met by a couple of coolies. These are poor people who carry passengers luggage for a (small) fee.  I was expecting someone in a uniform. What I saw was Steptoe and son. After a heated tactical debate amonst themselves on how to carry the 19 pieces of heavy luggage, they placed all 19 cases on what looked like a flat wheel barrow and secured them with rope. Those two will never be able to lift that I thought.

The older of the two men had clearly long past his retirement date and by the look of him I summised that he could barely pick his own nose, never mind lifting 19 heavy pieces of luggage. The second man was about 45 years of age and possessed a belly the size of Australia. Were gonna be late I said to myself. To make matters worse, I overheard the coolies being told that the coach had parked in the wrong terminal and we had to make a dash to the correct terminal. We are definitely going to be late I thought looking at my watch.

Within a second they had lifted the ‘wheel barrow’ with the 19 pieces of luggage and were running like bats out of hell to the correct terminal. I was wrong, they were not Steptoe and Son, but Batman and Robin. We all ran behind trying to keep up. Whatever they had for breakfast I wanted some!!! I consider myself fitter than most yet even I had trouble keeping up.

Again as is the case  in India, Health and Safety was non existent as they ran over railway tracks followed by us in hot pursuit. This must have been a funny sight for the locals. 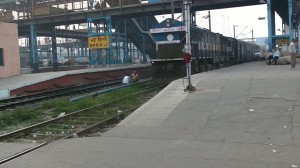 Finally we reached the correct terminal and to my relief the train was waiting at the platform. We paid a hefty tip to Batman and his sidekick, big belly Robin, who judging by the expressions on their faces went back to their bat cave as happy chappies.

The Train Carriage we booked was Business class, but compared to England it would barely pass for standard class with the only difference being the wider seats and curtains on the windows. The carriage itself was a bit on the dirty side. But hey, this was India, what did I expect.

I sat down and the Train jerked in to motion.  I looked out of the window as the train began picking up speed. We were barely out of the station when more makeshift huts came in to view. I couldn’t believe that People had made their homes on the platforms and were living in squalid conditions.

As we left the station, the platform made way for tons  of litter just piled next to the tracks. Plastic cartons, crisp packets, rubbish of all sorts and children were sifting through the decaying rubbish hoping to find anything remotely usable. A few feet away  a couple of children having  an early morning emptying of the bowels oblivious to the train passing by.

I really had had enough of all this squalor and was finding it difficult to cope with a lot of things that I had seen.

Within  30 minutes, Delhi was behind us (Thankfully) and the sight of wheat fields as far as the eye could see meant that we were heading towards the state of Punjab, and in particular, the city of Jullandha. The Birthplace of my Family. 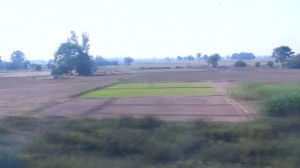 View from the train window

Four and a half hours later and the train came to a halt in the City of Jallandha. We unloaded and as I got off the train I noticed my father in the jostling crowd. My brothers, sister, wife, daughter and i pushed our way to greet him. I had last seen him six weeks ago. It was good to see him again.

I knew straight away that in the Punjab I would no longer be a tourist. I would meet my fathers family, meet my mothers family and have a greater understanding of my own origins.

Untill next time, over and out.

p.s. Baz and Dave, The temperature here has been between 33 and 35 degrees Celsius every day. Wish i was with you guys…..NOT!!!!